Weebit Nano Ltd. announced that, with its development partner CEA-Leti, it has demonstrated its first operational crossbar arrays, a milestone on the company’s path to creating discrete (stand-alone) non-volatile memory (NVM) chips.

The Slackware Linux Project released today Slackware 15.0 after six years of development, bringing you a more modern and fresh operating system with some of the latest and greatest GNU/Linux technologies.

Mozilla Firefox 97 Is Now Available for Download, This Is What’s New
Source: 9to5Linux

Mozilla today released Firefox 97 as the latest stable version of its open-source, free, and cross-platform web browser for GNU/Linux, macOS, and Windows platforms.

Toshiba was the only one of the big three disk drive manufacturers to increase its unit shipments in 2021, with exabytes shipped rising faster than the market average as well.

Qubes OS 4.1.0 has been released!
Source: The Qubes OS Project

At long last, the Qubes 4.1.0 stable release has arrived! The culmination of years of development, this release brings a host of new features, major improvements, and numerous bug fixes. Read on to find out what’s new, how to install or upgrade to the new release, and all the noteworthy changes it includes.

Intel made a greater than half-billion dollar loss on its Optane 3D XPoint business in 2020.

VMware’s on-ramp to VMs is the VMware Converter – a tool that automates the process of creating VMware virtual machines from physical machines (P2V). But VMware pulled the utility last week from its downloads pages, citing unspecified security risks.

The KDE Project announced today the release and general availability of KDE Plasma 5.24 as the next LTS (Long-Term Support) series of this powerful and modern desktop environment for GNU/Linux distributions.

Toshiba plans to use its proprietary recording technologies, FC-MAMR, MAS-MAMR, and disk stacking tech to lift nearline HDD capacities to 30TB from the end of its 2023 fiscal year. 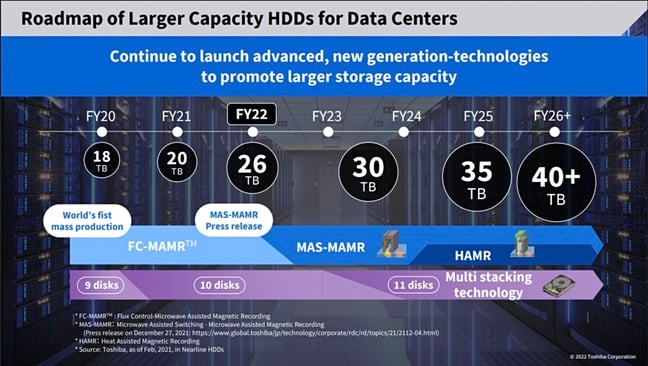 Production at Kioxia and Western Digital’s 3D NAND fabrication facilities in Japan is being disrupted by chemical contamination, with at least 6.5 exabytes of capacity lost.

The UBports Foundation announced today a call for testing for the next software update for their Ubuntu Touch mobile operating system for supported ‘Ubuntu Phone’ devices, OTA-22.